Marlon Hirsh: putting Manila ‘back on the map’

Hotelier Marlon Hirsh, General Manager of the Crown Towers and Nobu Hotels in Manila’s City of Dreams gaming, events and leisure complex, has a long pedigree in Asian luxury properties. Having been in his current role since the resort’s opening almost three years ago, he predicts a stellar future for the booming Bay district – which is helping transform the way potential visitors view the city, he says. In an interview with The Siteseer, dapper, quietly-spoken Marlon shared insights into his events and leisure businesses and outlined his vision.

Siteseer: There’ve been press reports in Bloomberg and elsewhere recently that Melco Resorts Philippines [owner of the City of Dreams complex] is the world’s most successful casino stock, mainly as a result of expanding business from China. How important is the Chinese gaming market for you?

Marlon Hirsh: Well obviously extremely important. The market continues to grow as the Chinese gain more discretionary income and are starting to travel, not just to southeast Asia, but to Europe and America, really expanding their horizons. It’s vital that we capitalise on it.

If you look at issues like visa processing, proximity and travel costs, the Philippines is a great destination and source of business. The country has a tremendous amount to offer, and not just to the Chinese. 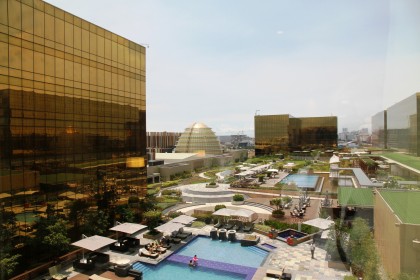 SS: All those beautiful islands within easy flying distance?

MH: Absolutely. If you look at [the Philippine islands of] Cebu, Palawan and Boracay for example, they’re within easy reach of not just China but Korea as well. The Koreans are a strong part of our business mix, as are the Filipino and Japanese – and even the Americans are starting to come. So the City of Dreams continues to grow.

SS: It must be pleasing for you, seeing as the business took a while to build momentum after opening.

MH:  It did take a while unfortunately. But by the time we got our international marketing together, by the tail end of 2015, we started to see things really picking up. We’ll continue to target certain markets, especially the corporate and MICE businesses. Right now we have a pretty good mix; we’re happy with our direction; it’s full-steam ahead.

SS: And the MICE business? How’s that performing for you?

MH: It’s growing. When we opened, somebody asked me to predict what the MICE market would represent at the City of Dreams. Off the cuff I pulled out a figure, said it would probably be around 30%, and that’s where we’re at.

Look, this is a great facility. It’s understated in the sense that we not only have great entertainment, but great ballroom facilities, and the AV and technology to go with them along with a choice of three hotels [with a Hyatt on site in addition to Crown Towers and Nobu] and twenty-plus restaurants to choose from.

any people may underestimate the City of Dreams. It’s much more than just a casino. It’s an integrated resort with world-class entertainment. There are plenty of other single-standing hotels that can offer several hundred rooms around town. Well here we have nearly a thousand rooms between three international-branded hotel properties, and they’re all luxury five-star. Not everyone may realise that. 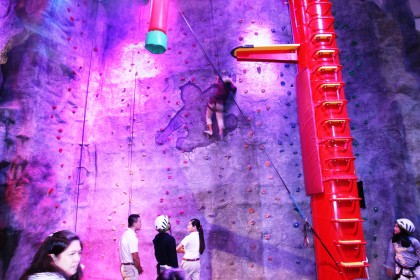 We have the F&B, the entertainment and DreamPlay [pictured left and below, a family play space with attractions also suited to teambuilding activities] which is a first in the world. Couple that with the service we provide. In my opinion, and of course I’m biased, it’s a no-brainer. Why not come here?

SS: I guess the triangle of good hotels in one location near the airport is a strong selling point?

MH: Yes, especially now that there’s a new, short expressway from the airport that was fully opened in December. We’ve seen an increase in our gaming business coming into the property as a result. It takes ten minutes to get from the terminals to our hotels, and about 20 to 30 minutes to [the key business centres of] Makati and Bonifacio Global City. Manila traffic hasn’t always enjoyed the greatest of reputations. The freeway has removed much of the anxiety about city traffic that [events planners] may have had when contemplating a trip to Manila.

SS: Who mostly makes up your MICE business?

MH: Lots of pharmaceutical companies, sales teams, doctors. As of now much of this business is regional, and we get some [events] visitors from Australia and Singapore.

I believe that will continue to build. People will realise that with 575 guest rooms between the Nobu and the Crown alone, the number of twin double [queen-sized] beds is significantly higher here than what you’d find in other hotels. So from a MICE perspective it’s very advantageous for planners. We can accommodate larger groups and are able to provide, say, 200 rooms for 400 people twin-sharing. That helps overcome a challenge many hotels face. All we have to do is shift our business around internally to be able to accommodate events guests. It’s almost unheard of. 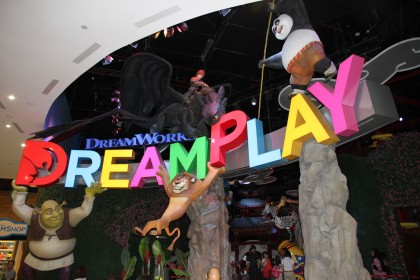 SS: In the general scheme of things is the City of Dreams a value-for-money destination?

MH: One hundred per cent yes. The perceived value for money is overwhelming – [ranging from] the way the sales team engages with clients, accommodating their last-minute requests, to the ease of use and ease of doing business. It’s a winner. Value lies also in the product and facilities and the great team of staff who work in these hotels. Their knowledge of the product, and food and beverage, and their ability to deliver services in the way we’d like our guests to experience them, are outstanding.

We’re in the Bay area of Manila, which is a rapidly developing commercial enclave. So if you want shopping we’re very close to the Mall of Asia, one of the largest in southeast Asia. If you want cultural perspectives, you’ve got Intramuros [the oldest part of the city that dates back to Spanish colonisation].

And if you want to play golf there’s a course at Intramuros as well. Makati is 20 to 30 minutes away. There’s something for everybody.

In addition, in a couple of years from now there’ll be another new, huge mall of 3.8 million square feet right across from the City of Dreams, accessible from us via a pedestrian bridge. It’ll have five storeys of retail space and more restaurants. The foot traffic will be unbelievable.

SS: You’ve talked in past interviews about the passion and engagement of the staff at the City of Dreams. How do they compare with those in the other hotels you’ve worked in?

MH: That belief still holds water. We’re fortunate enough to work in hotels that give new employees ample training, emphasising quality and standards. They have a wonderful attitude. There’s a particular pride and passion among staff to deliver five-star luxury experience.

I’ve discovered there’s something in the theory that hospitality is innate in the Filipino culture. I’ve been an expat for sixteen years, and in southeast Asia for fourteen of them: Thailand, Indonesia, Singapore. Filipinos’ English, widely spoken in local communities, is a huge plus for many international visitors.

It was interesting for me a couple of years back when we opened and had our mass recruitment drive. I had an opportunity to engage with the staff and interview every person who works for me. It was a phenomenal experience, bringing the corporate vision to life. The staff continues to perform and execute to this very day.

SS: Did you work for hotels in the States before coming to Asia?

MH: Yes, I started my career over twenty years ago with Ritz Carlton, Four Seasons and then Shangri-la. I’ve worked also in the Middle East and Europe. 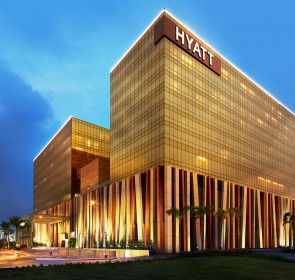 I’m proud of my luxury hotel experience which covers the gamut of line staff positions – security, night manager, housekeeping, guest services. We’re all professionals. A house keeper is not a maid; he or she is someone who provides a professional service.

It’s been a wonderful joy ride for me and my family and I’m fortunate to do what I enjoy and get paid to do it. My father taught me a long time ago that going to work should be like going on vacation. he luxury hotel business is like that. There are never two days exactly alike.

Whether you’re talking to kings and queens, high-end personalities, A-list celebrities and so forth or talking to staff who are new in the city, you find everybody has something useful to impart and contribute. You can’t stereotype anybody.

MH: He’s been here twice. He visited during the pre-opening and did a walk-through of the guest rooms, cracking jokes, being hands-on, sitting on sofas and testing them for comfort, checking the density of the pillows and that they were to specs. He came back for the launch of the Nobu.

We’re also lucky to have [Japanese chef Nobu Matsuhisa after whom the hotel is named] come to the property once or twice a year. We recently had a wonderful dinner for 300 covers here and book-signing with him. Incidentally he was just recently conferred a food and beverage lifetime achievement award by Esquire in the UK.

SS: In ten years’ time what will the City of Dreams and its hotels be like?

MH: I’ve got one line: the future is ours. This is a fantastic, world-class facility that’s competitive in every way. The area in and around Entertainment City will continue to expand. There’ll be more malls, embassies will come in, it’ll become even more of an entertainment centre, and we’ll be helping change Manila, putting it back on the map.

For more information about the City of Dreams, Crown Towers and Nobu hotel (one of whose rooms is pictured below), go here.

And see more Siteseer stories on the City of Dreams here: 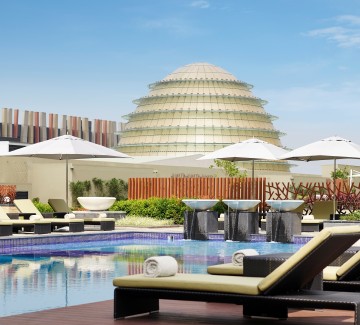 “I hope I’ve presented my property well enough,” says Jose Torres Badelles with a smile. “If I became overly excited talking about my country, the location and bright prospects for the years ahead, it’s because I’m a citizen hopeful for his people.”

END_OF_DOCUMENT_TOKEN_TO_BE_REPLACED 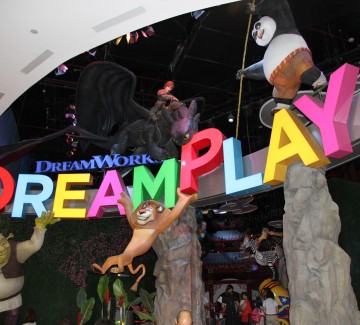 City of Dreams now a tonic for teams

The ribbon-cutting’s over, the teething troubles have been ironed out and visitors are pouring in. More and more incentive organisers are now considering the City of Dreams hotel and casino complex in Manila as a venue with a difference.

END_OF_DOCUMENT_TOKEN_TO_BE_REPLACED 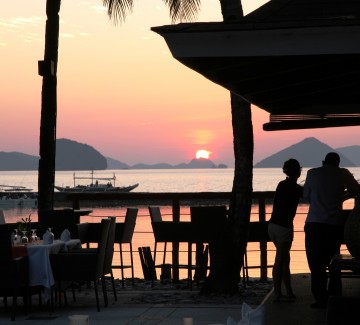 The sky over El Nido is overcast, scoured by the tail end of a typhoon that’s passed and headed north. I’m the only passenger in the Filipino trigger boat, whose bamboo outriggers scud over a smooth, slate-coloured sea.

END_OF_DOCUMENT_TOKEN_TO_BE_REPLACED 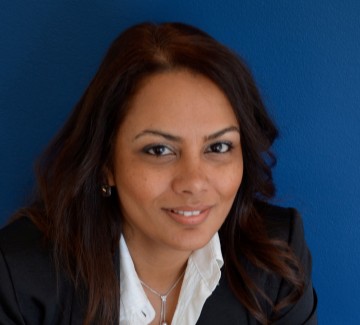